The Upper Summit Forecast called for wind chills of 30-40 below zero today, so Alex and I naturally decided to stay below treeline. The Osceolas seemed like a good, sheltered choice; we knew the trails were broken and somewhat packed, so off we went. 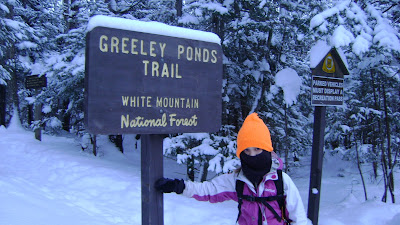 An inch or two of dry powder covered a nicely packed trail. 'Twas a splendid sight. 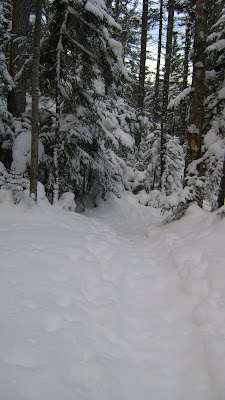 The 1.3 miles along Greeley Pond Trail was flat and easy; it didn't take us long to arrive at the Mt. Osceola Trail. 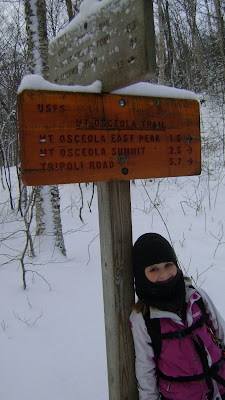 The first mile up East Osceola was relatively moderate, and neither of us found it difficult. That last half mile before the summit, on the other hand...well, let's just say that the picture below aptly describes our ascent up the steeps. 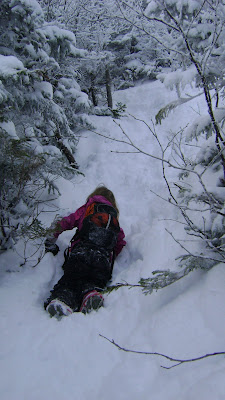 Two steps up, one sliding step down...it was a frustrating ordeal.

The day called for fog, so the view from the top of the slide was better than I expected... 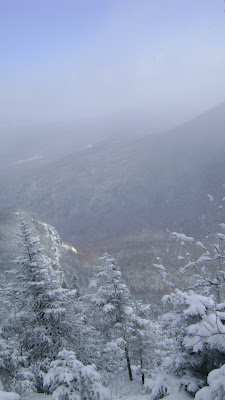 Weeks later (or so it seemed), we reached the summit of East Osceola. 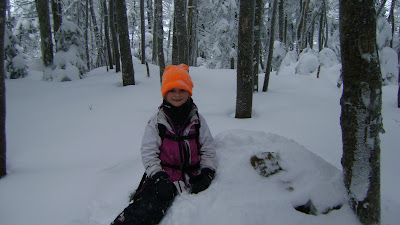 To my pleasant surprise, HappyHiker appeared during our snack break. We exchanged greetings, then she went on her way while I stuck a body warmer between Alex's layers (it was chilly up there and Alex looked cold).

At this point, Alex wasn't sure she wanted to continue; she had spent the entire previous day skiing with Hugh and now felt rather worn out. I told her I had no problem heading back to the car, but I did need her to understand that if she wanted to get Mt. Osceola for the winter 4K list and we didn't get it now, then we'd have to go over the East Osceola summit all over again on a different hike. There was the possibility of approaching Osceola later from the traditional summer trailhead, but that would mean a long road walk through deep snow along a very rarely used route. As I explained all this, the food and body warmer began to do their jobs, and Alex perked up and became her usual energetic self. After a few minutes of thinking it through, she decided she felt strong enough to go ahead and get the second peak. 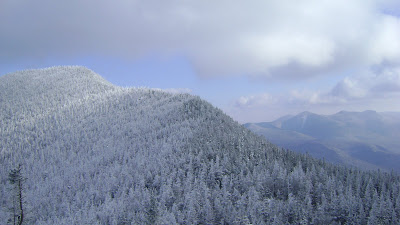 The ascent up Osceola wasn't nearly as difficult as the ascent up East Osceola. The only troublesome spot was the chimney bypass, a very steep scramble up a little narrow ledge. Alex scampered to the top without a problem, but I couldn't get up. The slippery snow prevented my hands from getting a good grip on the rocks, and my feet kept sliding out from under me. Luckily, a nice fellow named Ben came to my aid; he found us while he was descending and offered to pull me up by my hiking poles. I happily accepted his offer, and Alex and I were able to continue our ascent (thanks again, Ben!). 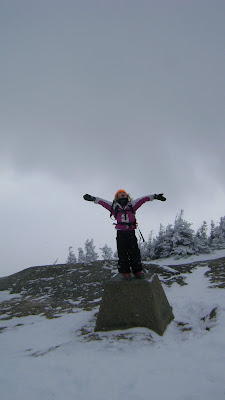 HappyHiker was waiting for us when we arrived. We quickly ate a snack and began the descent; though we were out of the wind, it was still too cold to linger.

The trek back to East Osceola was uneventful, except for...the chimney bypass (of course). This time, it was Alex who had the problem. She couldn't get herself down without potentially sliding uncontrollably and smashing against a few rocks or falling over the ledge and impaling herself on some trees. We figured it out eventually...I anchored myself in a position where she could slide into me hard without knocking me over. Then we kind of half slid, half jumped the rest of the way down.

The rest of the hike went smoothly. We dragged ourselves back up East Osceola, then had a blast all the way back down to the car. There were some very steep bits (the same stretches we had cursed on the way up) that required some very controlled butt-sliding, but on the whole, the descent was easy. We had fun playing leapfrog with HappyHiker until we reached Greeley Ponds Trail, then the three of us walked out together, reaching the parking lot just as the sun disappeared.