On August 30, 2009, Alex and I reached the peak of Mt. Moosilauke, thus bringing to an end our fifteen month peakbagging quest. We have now ascended and descended, on foot, each of the 48 mountains of the AMC's White Mountains Four Thousand Footer list.

We hiked during each month of the year, experiencing the unique beauties and challenges of every season. Along the way, we learned how to use snowshoes and Microspikes, and how to layer, delayer, and layer again. We recognized the value of balaclavas and chemical hand warmers. We found that we really, really don't like to posthole. We discovered that winter hiking can be a lot easier than summer hiking, and we realized that slugs are people too.

Most importantly, we've formed what I hope are lifelong friendships with certain wonderful hikers. We've also discovered that chocolate is the Eleventh Essential. Hmmm...maybe that's more important. Guess it's a tie.

Enough with the preliminaries....now on to the trip report.

The plan was for boots-on-trail at 8:30. Lots of folks showed up to hike with us, including MadRiver and Susan, happyhiker, BobnGeri, bikehikeskifish and his family, lawnsale, Tim&Val, BarkingCat, Salty, Joe and his family, Paradox, Mad Townie and his daughter, and DaveBear.

There was a flurry of camera action just before we headed out... 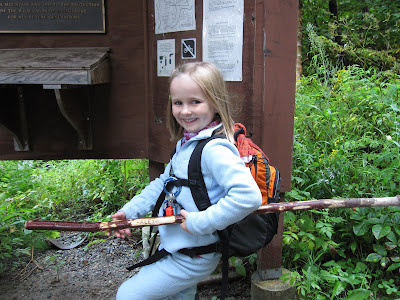 ...then we were on our way up Gorge Brook Trail.

Sage started off on her own two feet, tackling the rocks with aplomb and often hiking ahead of the crowd with MadRiver. She made it just under a mile and a half before asking to be carried. I put her inside my almost-empty winter pack and carried her as I would a sleeping bag. MadRiver and happyhiker graciously carried most of my gear so I could handle Sage. 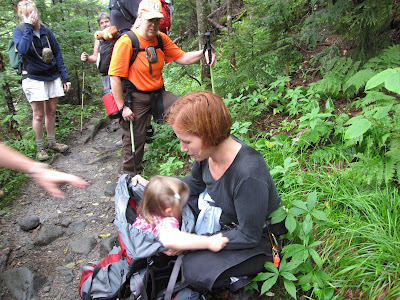 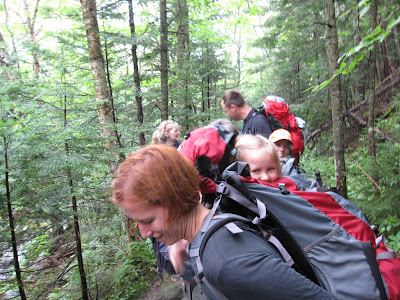 Alex hiked with Amanda and Matthew, hikebikeskifish's two friendly and outgoing kids. Alex loves the company of other kid hikers.

After the halfway point (marked by the "Last Water" sign), Tim of TimandVal graciously offered to trade packs with me. I happily acquiesced. 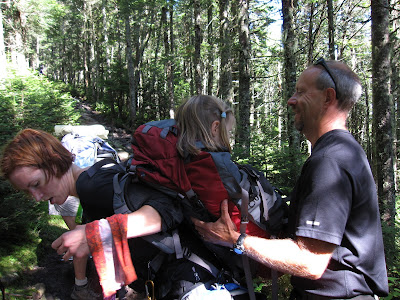 We kept on truckin', the crowd chatting pleasantly and everyone enjoying the beautiful, sunny weather.

After a steady blur of hiking, talking, and shoelace-tying, we reached the first of the stone steps.

The kids continued upward while the adults followed closely behind. At one point we were able to turn and see Ravine Lodge below.

Dave Metsky and a few of his friends now joined our group. We made our introductions, then complimented him on the excellent craftsmanship of the trail, much of which he had fashioned himself.

The kids were getting tired (Sage even fell asleep in the backpack, though she vehemently denied it afterward), but luckily we were very close to the top. Everyone seemed to revive once we reached scrub. Sage woke up and was removed from the pack, then quite a few small stones were joyously rearranged as everyone took another break.

When the kids felt rested, we journeyed onward.

A short dip back down into the trees (where more rocks were picked up and moved around)...

...then we broke above treeline for good. Alex picked up her pace and moved quickly and confidently toward the summit. We could see and hear people above us, cheering her on.

Hugh was waiting close to the summit. 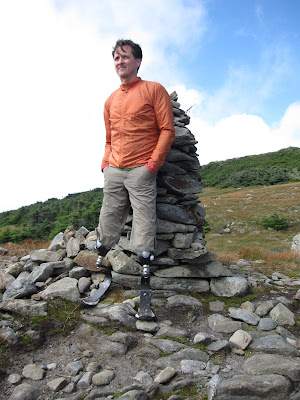 He had started out well before us in case he needed extra time to ascend. He was all smiles as Alex and Sage approached. We paused for a few moments while they embraced, then we moved onward.

Alex approached the final steps under a hail of cheers. Geri, Mad Townie, and bikehikeskifish formed a bridge with their hiking poles. 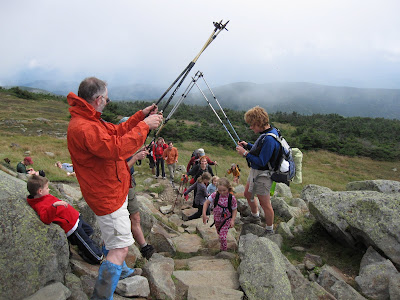 Then, finally, we were at the high point. Folks at the top burst into applause and there was a lot of picture taking all around. Here we are, joined by bikehikeskifish's two kids.

Bob and MadRiver presented us with our official AMC NH48 patches.

Bob then presented Alex with a shirt that lists all the NH48 peaks on the back. I put it on over her turtleneck while Sage and Hugh watched. 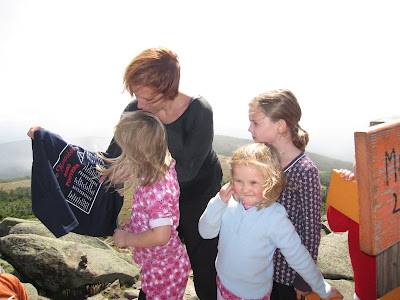 Now it was time to relax and enjoy the moment. 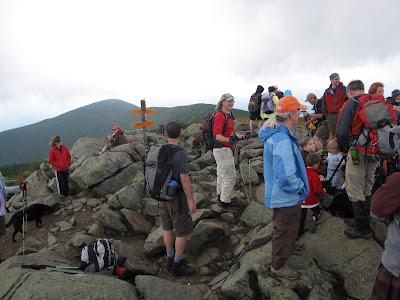 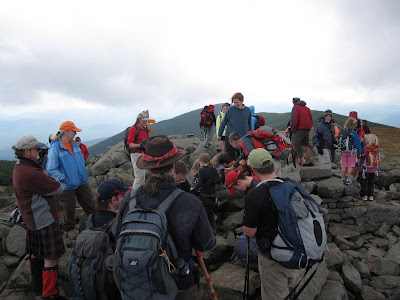 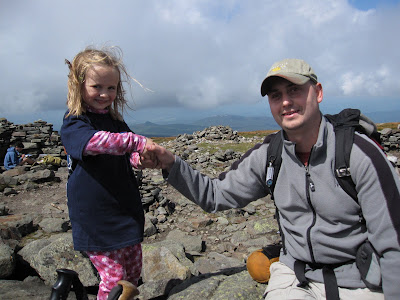 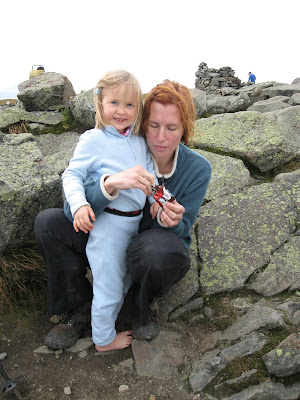 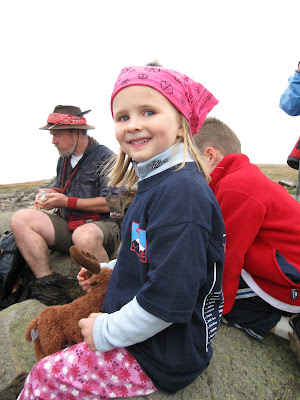 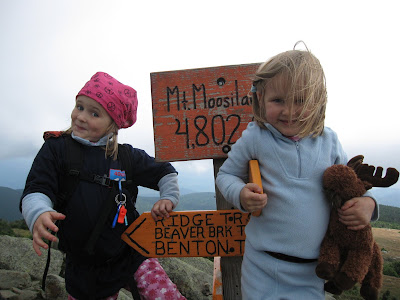 We hung out for an hour and a half, then the crowd split up and descended various routes. Alex and Sage wanted to stick with Amanda and Matthew, so our two families went back down Gorge Brook together. Hugh, BobnGeri, and happyhiker accompanied us.

Going down is always easier than going up -- the kids ran and laughed, even played tag along the trail. Sage was carried for a while -- this time, bikehikeskifish did the honors -- but once we reached the "Last Water" sign, Sage decided to walk the rest of the way on her own.

Alex went ahead with Amanda and hiked down with her most of the way. When we reached the end of the trail, I called her to me. I wanted to officially finish with her, side-by-side. Selfish of me, perhaps, because she was happy going ahead with her new found friends. However, I wanted to catch just one last quiet moment with my daughter. A final few solitary minutes, for nostalgia's sake.

It was bittersweet, knowing that she is growing older and needing me less and less. At the beginning of our quest, she was a five and a half year old girl who still very much wanted her mama nearby. Now, she's over six and a half and taking bigger and bigger steps away from me. Natural and appropriate, of course. Yet sad, at least for me.

Here, we officially finish our 4Ks. Just the two of us, together.

Then, it was off to the fabulous after-party thrown by MadRiver and Susan, where DiamondRidge and Gwynna presented us with a great poster of all our summit pictures.

Many, many thanks to all who have helped us on our quest. Especially MadRiver, who accompanied us on our three toughest hikes (Willey, Isolation, and Owl's Head). You've been a great friend to us, MR.

Thanks also to Susan, for hosting the after-party along with MadRiver, for being such a cool person in general, and for playing all those name games with Alex while hiking up Valley Way.

Thanks to DiamondRidge and Gwynna, for being good friends and for bringing MooseMaiden and her little sister over to hang out with Alex and Sage.

Thanks to BobnGeri, who have been sources of support and good conversation for months.

Thanks to happyhiker, who's hiked with us a number of times and is always great company.

Thanks to LRiz, who's been a source of inspiration to Alex.

Thanks to DaveBear for joining us on Owl's Head.

A giant thanks to Sage, who has been supportive of Alex's adventures and who has been very understanding of Mama's time away. I owe her some camping trips, pronto.

And of course, another giant thanks to Hugh, who has taken care of Sage while Alex and I have been away. He's graciously entrusted our daughter to me during this entire process, always supporting Alex's endeavors and our outings, and leaving it completely up to me to take care of every detail. Thanks for understanding our need to do this, Hugh.

So I guess this is the end of this blog -- unless I change it to a general hiking blog for Alex, since I have a feeling this is not the end of her adventures in the mountains...
Posted by Patricia Ellis Herr, Alexandra Herr, and Sage Herr at 6:43 PM